Google needs no introduction. There are hardly any companies in any of the industry who dominates the market share like Google does in global scale. This search engine giant has become vital part of most of our daily life, so much so that we need it every now and then to search and discover anything and everything in the internet. It is not surprising for people to wonder where do all of this information from Google are stored in or retrieved from. Therefore, we have come up with Google data center locations around the world along with map which hosts its servers. 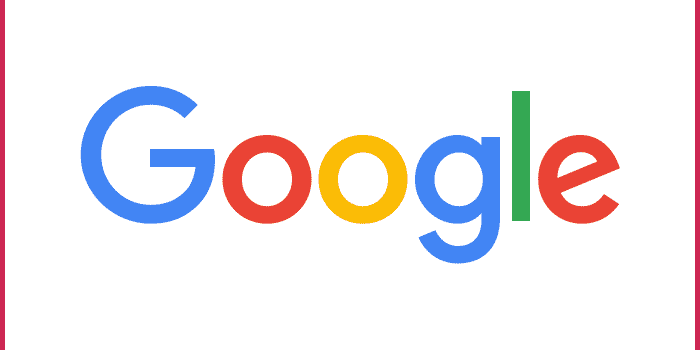 This shall give you fair idea about the location of Google data centers & servers that processes and serves your search queries, host blogs that you have written on blogspot, emails that you send or receive, videos that you stream on youtube, and files that you put on google drive.

Currently there are 21 Google Data Center locations in 4 continents including North America, South America, Europe and Asia. These are thoroughly detailed below:

There are two Google data centers located in the continent of Asia, which includes:

This place is three hours down the coast from Taipei. It is located amidst 100-meter-tall wind turbines in the coastal industrial park. Data center area is spread across 15 hectares land which was acquired in around 2011. Google claims it to be one of the Asia’s most efficient and environment friendly data center. 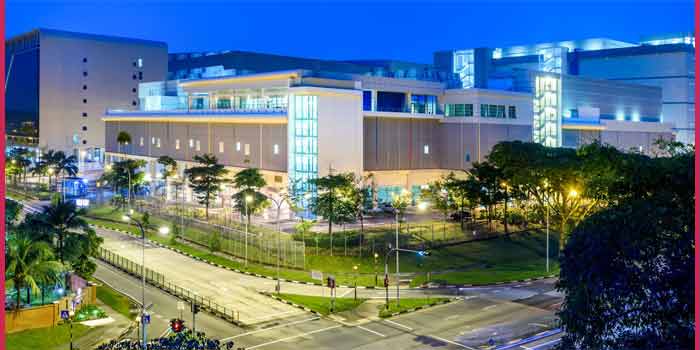 This is the first data center of Google in South East Asia region. Spread across 2.45 hectares land in Jurong West, this multi-storied data center started its services in December 2013.

There are five Google data centers located in the continent of Europe, which includes:

Located in same city as the European headquarters of Google, this data center became operational since September 2012.

Fully operated with 100% renewable energy from day one since 2016, google data center located in Eemshaven, Netherlands provides employment to around 250 people.

The construction of data center in Fredericia is expected to continue through 2021, which after completion will be the fifth google data center in Europe. It aims to employ around 150-250 staffs once completed.

Before being a data center, this property in Hamina was a Finnish paper company called Stora Enso. This is one of the huge data centers of Google with investment of around €2 billion providing employment to over 4000 people in Finland.

There are thirteen Google Data centers located in the continent of North America, which includes:

Berkeley is a county near eastern coast of USA which falls under South Carolina State. Google announced its plan to construct the data center infrastructure in Berkeley County in 2007. In 2013, it further planned the expansion of the facility. Google has invested around $2.4 billion for the data center in this location, creating over 400 jobs while helping the community around. The facility here collects rainwater to source the water required for cooling system.

Council Bluffs is a city located in Pottawattamie Country in Iowa State, which lies near central area of USA. Google data center here is very close to wildlife, with deer frequently visiting the facility. Google announced the plan to construct their data center facility in Council Bluffs in 2007. It further planned its expansion on 2012 and 2015. So far, Google has invested over $2.5 billion in this infrastructure creating over 400 jobs.

Douglas County is part of popular Atlanta Metropolitan area in Georgia State, which lies near center of the USA. Google data center had its presence in this region since 2003. Over time, company has invested over $1.2 billion in this data center infrastructure creating over 350 jobs in the region. On part of social strengthening, Google has granted over $7.5 million to local schools since 2011. Also, they have designed innovative technology to recycle water used in cooling systems of facility located here.

Google Data Center is under construction in a location of Henderson city in Clark County of Nevada State. This region is located near Las Vegas on the western part of USA. The facility, whose formal construction began in July 2019, is estimated to cost over $600 million. Once fully operational, it is expected to create hundreds of jobs for engineers, computer technicians, maintenance workers, contractors, security personals and food service providers. However, Google has already forwarded their helping hands in the region to serve the community with over $1 million in grants to Nevada’s non-profit organizations.

Google formally began the construction of data center infrastructure in Jackson County in April 2018. This county lies in the north-east corner of Alabama State, which touches the Gulf of Mexico in the southern part of USA. This Google data center in Alabama is expected to cost around $600 million and will support Cloud infrastructure as well. Once completed, it is expected to create around 75-100 jobs in various full-time roles. Google has already started investing in the community since 2016, in areas such as education, science, technology, engineering and mathematics. They have already contributed over $600,000 in Alabama in the forms of grants, events or programs.

Google has a fully operational data center facility in Lenoir city providing over 250 on-site jobs. Lenoir lies in Caldwell County in North Carolina State, which lies towards eastern part of USA. Announced in 2007, Google has so far invested around $1.2 billion to build this data center facility in North Carolina. Besides, as part of social cause, Google has invested in areas of local education, green initiatives and renewable energy.

Virginia is one of the most loved locations for data center as many companies have built their facility here. Citing this, Google too announced its plan in 2018 to build its own data center infrastructure in the Loudoun County of Virginia State. This state lies in the eastern part of USA with site-location near Washington DC. Google has estimated investment of around $1.2 billion in this under construction project with further expansion plans announced in 2019.

Google has a data center complex in Mayes County which falls in Oklahoma State of USA on near central region of the country. This facility was announced in 2007, which was further subjected to expansions in upcoming years in three of the occasions. So far, Google has invested over $2.5 billion in this data center infrastructure located in Oklahoma. It has created over 400 jobs providing incentives to the community around. Besides, Google has granted over $2 million to non-profit organizations and schools in the region.

While many of the data center companies have chosen major cities such as Dallas or Austin for their facility in Texas, Google has proudly chosen Midlothian city in Ellis County. Texas is located towards southern part of USA and is second largest state after Alaska in terms of area. Began the construction in 2019, company has estimated the cost of around $600 million to build the data center in Midlothian. Google has generously supported the local community with over $4 million in grants since 2011. Once operational, it is also expected to create hundreds of jobs in Texas.

Google has another of its data center facility under construction in Montgomery County which lies in Tennesse state of USA just above Alabama. The construction of this Google data center began on February 2018. Company has estimated cost of around $600 million for this facility, which is expected to create over 70 jobs once operation begins. Google has provided over $450,000 in grants to local parties in Tennesse and supported social causes including green initiatives.

Another of Google data center is under construction in Papillion City since October 2019. Papillion is located in Sarpy County in Nebraska Sate of USA. The estimate cost of this project is also $600 million. Google’s presence there should boost the development of Nebraska and Silicon Praire as hub of tech-innovation. Google has already granted over $2 million to local parties in Nebraska since 2009.

The Dalles is the largest city in Wasco County in Oregon State, which lies near north-west corner of USA. Google opened their data center facility here in 2006. Over time, Google has invested around $1.8 billion in this facility and created over 200 jobs. Like in other locations, Google has been actively involved in helping the community around the data center in Wasco County with contribution of over $12 million in grants and donations.

There is single google data center in the continent of South America, which includes:

Chile enjoys being the only country to host the data center of Google in Latin America. This data center was fully operation in January 2015 and employs around 20 staffs. Google claims it to be one of the most efficient and environment friendly data center in South America.

Here is the map overview of locations of Google Data Centers spread across the world: 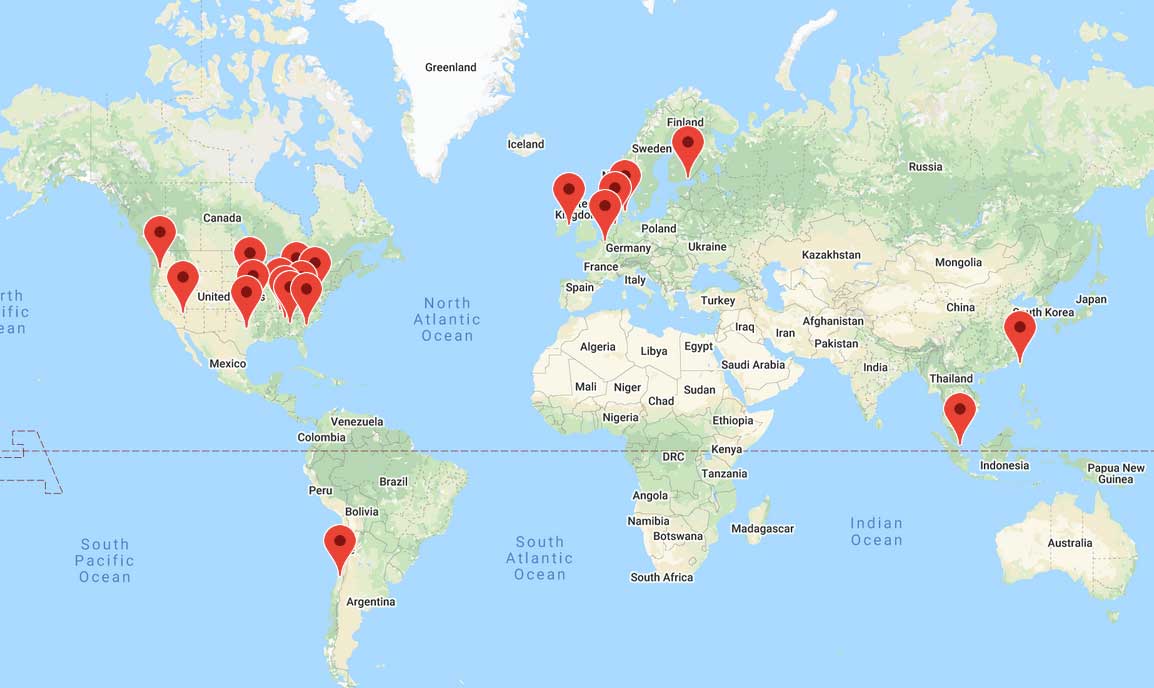